Emmett Turns 5, Celebrates at Pump It Up

Can you believe it? Our little man has officially hit the 5-year mark! 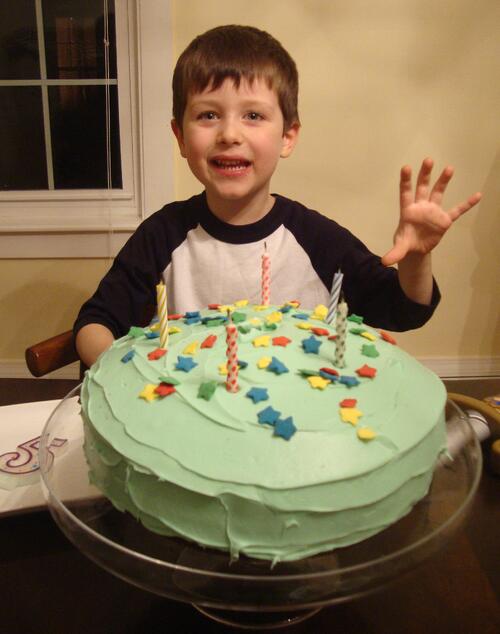 END_OF_DOCUMENT_TOKEN_TO_BE_REPLACED

Happy Birthday to the Gusbuster!

Today my awesome little nephew, Gus turned 1!� I just got back from spending a few days in Michigan visiting my family and celebrating his birthday, as well as my brother-in-law's birthday and the 4th of July in an all-in-one extravaganza.� Needless to say, my sister the event designer made sure it was fabulous!

Emmett had some reservations about Gus at first, but in the end, I think he warmed up to him.�� Here are a few shots of the birthday boy and the awesome weekend.

I have a million things to do to finish getting ready for Emmett's party today, but I couldn't leave his first birthday without a post on the blog, so here's a quickie...

I'm going to be completely trite here and just say it -- man, does time fly!� Exactly a year ago today I was being admitted to my hospital room at MGH in excruciating pain, waiting to welcome my little baby lump into the world (at 11:47 a.m.), and now he's a whole year old!� Happy Birthday, Emmett!

I spent most of last weekend putting together Emmett's baby book (yes -- an actual book, with pages), which meant I spent a lot of time reviewing Emmett's major milestones within the past year, mainly through pictures.� While I realized I have about a googolplex's worth of photos of Emmett, James and I both agreed that the following is one of our favorites (he's about 9 months here).� And feel free to leave some Happy Birthday wishes for Em in the comments.� It's been an awesome year!

Stay tuned early next week for a birthday recap.� I'm assuming there will be tons of messy cake pictures to enjoy!

END_OF_DOCUMENT_TOKEN_TO_BE_REPLACED

Emmett spent last weekend up in Maine with Gran Lucy and Grandpa Mac to give James and I some time alone to celebrate our 2-year (dating) anniversary.� While it was fun to do some adult things like go out to dinner in Harvard Square, have intelligent conversation and see a movie at the theater, I'm not gonna lie - I missed the little goober.

Of course he just had to do some growing while we were away.� Lucy noticed a budding tooth in the front, top row of his gums while he was in her custody, which has without a doubt contributed to his crankiness this week.� Luckily though, Lucy also came up with what I'm calling the apple remedy: a semi-peeled apple for Emmett to chew on, which really does the trick.�� It keeps him occupied, and it feels good on his gums.� A lifesaver!� Check out the apple remedy in action:

In other news, it's my sister's (Aunt Adrienne) birthday today.� Happy Birthday, A!